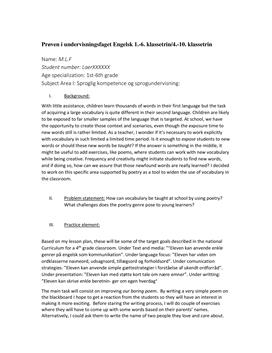 Problem statement:
How can vocabulary be taught at school by using poetry? What challenges does the poetry genre pose to young learners?

Background:
With little assistance, children learn thousands of words in their first language but the task of acquiring a large vocabulary is quite different in their second language. Children are likely to be exposed to far smaller samples of the language that is targeted. At school, we have the opportunity to create those context and scenarios, even though the exposure time to new words still is rather limited. As a teacher, I wonder if it's necessary to work explicitly with vocabulary in such limited a limited time period. Is it enough to expose students to new words or should these new words be taught? If the answer is something in the middle, it might be useful to add exercises, like poems, where students can work with new vocabulary ...

This interlanguage analysis is inspired by the model of Bruunt and Bryanne, from the book
Handbook for Language Detectives.
Context
I know little about the context in which this assignment was written. It is from a student in 6th grade. I deduce that they had to write a story about an imaginary character and possibly draw it. I can imagine as well that the students had been working on this genre before and had seen some examples of how to build up the story.
Content
The student wrote a short story about an imaginary... Køb adgang for at læse mere Allerede medlem? Log ind

Materialer relateret til Vocabulary by poetry | Synopsis til KMP.