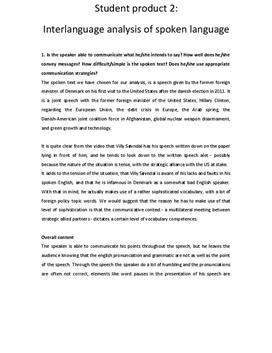 1. Is the speaker able to communicate what he/she intends to say? How well does he/she
convey messages? How difficult/simple is the spoken text? Does he/she use appropriate
communication strategies?

2. The points Interpretation of the analysis: Strengths and weaknesses of the text:
What is good about the spoken text?

Feedback Imagine that you have to give the speaker feedback:
Discuss how you would give the pupil feedback – remember to start out by addressing
what is good about the text. Decide on at least one goal the pupil might need to work on
and how

1. Is the speaker able to communicate what he/she intends to say? How well does he/she convey messages? How difficult/simple is the spoken text? Does he/she use appropriate communication strategies?

The spoken text we have chosen for our analysis, is a speech given by the former foreign minister of Denmark on his first visit to the United States after the danish election in 2011. It is a joint speech with the former foreign minister of the United States, Hillary Clinton, regarding the European Union, the debt crisis in Europe, the Arab spring, the Danish-American joint coalition force in Afghanistan, global nuclear weapon disarmament, and green growth and technology.

It is quite clear from the video that Villy Søvndal has his speech written down on the paper lying in front of him, and he tends to look down to the written speech alot - possibly because the nature of the situation is tense, with the strategic alliance with the US at stake. It adds to the tension of the situation, that Villy Søvndal is aware of his lacks and faults in his spoken English, and that he is infamous in Denmark as a somewhat bad English speaker. With that in mind, he actually makes use of a rather sophisticated vocabulary, with a lot of foreign policy topic words. We would suggest that the reason he has to make use of that level of sophistication is that the communicative context - a multilateral meeting between strategic allied partners - dictates a certain level of vocabulary competences... Køb adgang for at læse mere Allerede medlem? Log ind