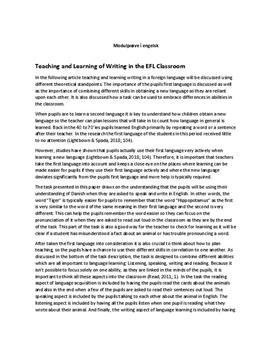 Engelsk modulopgave om "Teaching and Learning of Writing in the EFL Classroom".

In the following article teaching and learning writing in a foreign language will be discussed using different theoretical standpoints. The importance of the pupils first language is discussed as well as the importance of combining different skills in obtaining a new language as they are reliant upon each other. It is also discussed how a task can be used to embrace differences in abilities in the classroom.

When pupils are to learn a second language it is key to understand how children obtain a new language so the teacher can plan lessons that will take in to count how language in general is ...

This task is meant as an ending to a project period in the class. For that reason, the task will not have a focus of the children learning new words, but rather have the focus that the children get a chance to catch up on words already ...

The object of the task is to do a repetition of the project period the class has just been through and at the same time check for individual learning. The task is a task the goes from talking and listening to writing and finally to reading. The first part of the task will have the pupils working in... Køb adgang for at læse mere Allerede medlem? Log ind

Materialer relateret til Modulprøve i engelsk om the EFL Classroom.