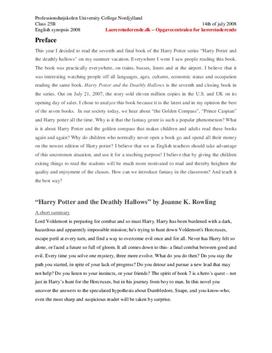 Preface
“Harry Potter and the Deathly Hallows” by Joanne K. Rowling
A short summary
Method
Motifs
Symbols
Teaching Fantasy in school
Problem formulation
What is fantasy and why does it fascinate us?
Fantasy in the English classroom?
Primary literature
Secondary literature

Preface
This year I decided to read the seventh and final book of the Harry Potter series “Harry Potter and the deathly hallows” on my summer vacation. Everywhere I went I saw people reading this book. The book was practically everywhere, on trains, busses, liners and at the airport. I believe that it was interesting watching people off all languages, ages, cultures, economic status and occupation reading the same book. Harry Potter and the Deathly Hallows is the seventh and closing book in the series. Out on July 21, 2007, the story sold eleven million copies in the U.S. and UK on its opening day of sales. I chose to analyze this book because it is the latest and in my opinion the best of the seven books. In our society today, we hear about “the Golden Compass”, “Prince Caspian” and Harry potter all the time. Why is it that the fantasy genre is such a popular phenomenon? What is it about Harry Potter and the golden compass that makes children and adults read these books again and again? Why do children who normally never open a book go and spend all their money on the newest edition of Harry potter? I believe that we as English teachers should take advantage of this uncommon situation, and use it for a teaching purpose! I believe that by giving the children exiting things to read the students will be much more motivated to read and thereby heighten the quality and enjoyment of the classes. How can we introduce fantasy in the classroom? And teach it the best way?

“Harry Potter and the Deathly Hallows” by Joanne K. Rowling
A short summary
Lord Voldemort is preparing for combat and so must Harry. Harry has been burdened with a dark, hazardous and apparently impossible mission; he's trying to hunt down Voldemort's Horcruxes, escape peril at every turn, and find a way to overcome evil once and for all. Never has Harry felt so alone, or faced a future so full of gloom. It all comes down to this- a final combat between good and evil. Every time you solve one mystery, three more evolve. What do you do then? Do you stay the... Køb adgang for at læse mere Allerede medlem? Log ind