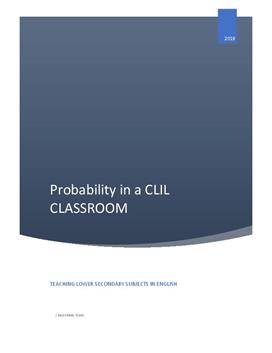 Studieprodukt i engelsk om probability in a CLIL classroom.

It is about a teachingplan and rationale about two modified elements in form of an input activity and output activity.

Introduction
The scope of this rationale is to improve elements from a original teaching sequence in math. The original sequence is from an American webpage sharemylesson.com. The sequence is made for the 7th grade and is originally part of an 8 days long sequence. The elements in this rationale is chosen from the 7th day.
The topic is probability and the sequence's overall goal is for the students to be able to understand the difference between dependent and independent events and how replacement and no-replacement works in this context.

Modified input
The original element of input was quite unspecific as it were in a form of teacher's explanation,
however there were a YouTube video to work with. The video is a 11-minute-long video, where there is a guy who explains and illustrates with a concrete experiment in form of a deck of cards and flipping a coin - the difference between independent and dependent events and replacement/no-replacement.

The modified input is going to be the teacher's explanation in the beginning of the class instead of the YouTube clip. The teacher is going to introduce the difference between dependent and independent events and the concepts of replacement/no-replacement. The content of the... Køb adgang for at læse mere Allerede medlem? Log ind