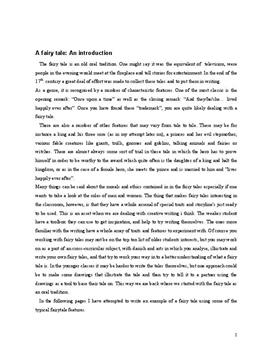 Eventyret hed "The king and his three sons".

A fairy tale: An introduction
The fairy tale is an old oral tradition. One might say it was the equivalent of television, were people in the evening would meet at the fireplace and tell stories for entertainment. In the end of the 17th. century a great deal of effort was made to collect these tales and to put them in writing.
As a genre, it is recognised by a number of characteristic features. One of the most classic is the opening remark: “Once upon a time” as well as the closing remark: “And they/he/she… lived happily ever after”. Once you have found these “trademark”, you are quite likely dealing with a fairy tale.
There are also a number of other features that may vary from tale to tale. These may be for instance a king and his three sons (as in my attempt later on), a princes and her evil stepmother, various fable creatures like giants, trolls, gnomes and goblins, talking animals and fairies or witches. There are almost always some sort of trial in these tale in which the hero has to prove himself in order to be worthy to the award which quite often is the daughter of a king and halt the kingdom, or as in the case of a female hero, she meets the prince and is married to him and ”lives happily ever after”.
Many things can be said about the morals and ethics contained in in the fairy tales especially if one wants to take a look at the roles of men and women. The thing that makes fairy tales interesting in the classroom, however, is that they have a whole arsenal of special traits and storyline's just ready to be used. This is an asset when we are dealing with creative writing i think. The weaker student have a toolbox they can use to get inspiration, and help to try writing themselves. The ones more familiar with the writing have a whole array of traits and features to experiment with. Of course you working with fairy tales may not be on the top ten list of older students interests, but you may work on as a part of an cross-curricular subject, with danish and arts in which you analyse, illustrate and write your own fairy tales, and that try to work your way in to a better understanding of what a fairy tale is. In the younger classes it may be harder to write the tales themselves, but one approach could be to make some drawings that illustrate the tale and then try to tell it to a partner using the drawings as a tool to base their tale on. This way we are back where we started with the fairy tale as an oral tradition... Køb adgang for at læse mere Allerede medlem? Log ind