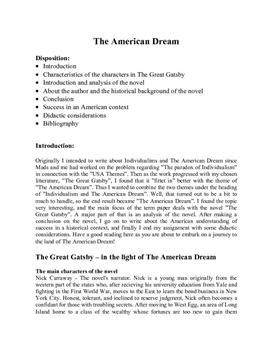 The Great Gatsby i engelskundervisning

Introduction:
Originally I intended to write about Individualims and The American Dream since Mads and me had worked on the problem regarding ”The paradox of Individualism” in connection with the ”USA Themes”.

Then as the work progressed with my chosen litterature, ”The Great Gatsby”, I found that it ”fittet in” better with the theme of ”The American Dream”.

Thus I wanted to combine the two themes under the heading of ”Individualism and The American Dream”. Well, that turned out to be a bit to much to handle, so the end result became ”The American Dream”. I found the topic very interesting, and the main focus of the term paper deals with the novel ”The Great Gatsby”. A major part of that is an analysis of the novel.

After making a conclusion on the novel, I go on to write about the American understanding of success in a historical context, and finally I end my assignment with some didactic considerations. Have a good reading here as you are about to embark on a journey to the land of The American Dream!
The Great Gatsby – in the light of The American Dream
The main characters of the novel Nick Carraway - The novel's narrator. Nick is a young man originally from the western part of the states who, after recieving his university education from Yale and fighting in the First World War, moves to the East to learn the bond business in New York City. Honest, tolerant, and inclined to reserve judgment, Nick often becomes a confidant for those with troubling secrets. After moving to West Egg, an area of Long Island home to a class of the wealthy whose fortunes are too new to gain them entrance into fashionable society, Nick quickly befriends his next-door neighbor, the mysterious Jay Gatsby.

Jay Gatsby - The title character, and a very wealthy young man living in a big mansion in West Egg. Gatsby is famous for the extravagant parties he holds every Saturday night, but no one knows where he comes from, what he does, or how he made his fortune. As the novel unfolds Nick learns that Gatsby was born as James Gatz on a farm in North Dakota. Working for a millionaire made him dedicate his life to the achievement of wealth, and when he met Daisy while training to be an officer in Louisville,he fell in love with her. Nick also learns that Gatsby made his fortune through criminal activity, as he was willing to do anything to gain the position he thought was necessary to win Daisy... Køb adgang for at læse mere Allerede medlem? Log ind