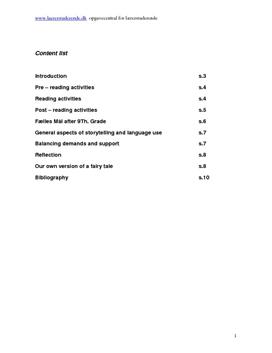 Introduction:
The subject of this assignment is how storytelling can be used to develop second language learning.

The question is why storytelling?

The aspects I will discuss in this paper are:
1. Fairy tales are universal folk art and are therefore accessible to all ages
2. They can be used at all levels
3. Work with fairy tales can help train reading, writing, speaking and listening skills
4. Work with fairy tales can help to develop imagination and creativity
5. As fairy tales deal with universal human problems, work with them will help learners reflect on
– and give them the possibility of having more influence on - their daily lives.
Storytelling is accessible to all ages and is a relevant subject to work with in Folkeskolen.
Storytelling can be used at all levels and the students can benefit a lot from working with stories.

Our own version of a fairy tale
Once upon a time, there were three brothers known as the notorious McClumsy Brothers. They were the kind of boys, who always ended up getting in trouble.
Two of the brothers were large and frightening in their appearances. The third was smaller.
One day when the three boys had nothing better to do than walk their pit bulls in the park, the small McClumsy saw the most incredible chick, he had ever seen. She had the brightest red hair, and it looked as if she was wearing a hood. He was so enchanted by her beauty, that he did not notice his pit bull was humping a small pink puddle.
He felt drawn and could not take his eyes of her. His two brothers saw it and started laughing, as... Køb adgang for at læse mere Allerede medlem? Log ind

Materialer relateret til Storytelling i engelsk.