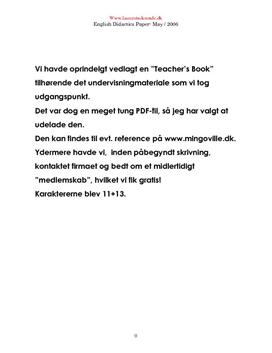 Synopsis om at undervise i engelsk i 3. klasse.

As of 2004, it was decided that the teaching of English should commence in the 3rd grade. The government bases this decision on the growing influence and status of English not only in Denmark but globally. As the primary language of approximately 370 million people1, it is the preferred lingua franca in most countries. English is also the most applied language in international business- relations and the communication of research and knowledge in technological, academic, entertainment, and political aspects- just to name a few. Thus, English skills are regarded as one of the most important competences for the success of today's children as tomorrow's adults. English teachers have the advantage that the target language is an extensive part of most children's culture. Its presence is visible in television-cartoons, internet-sites, magazines and movies... Køb adgang for at læse mere Allerede medlem? Log ind