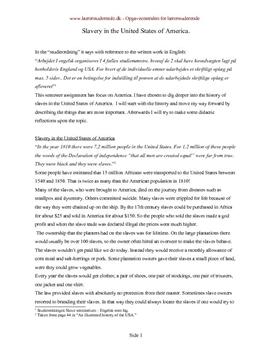 This semester assignment has focus on America. I have chosen to dig deeper into the history of slaves in the United States of America. I will start with the history and move my way forward by describing the things that are most important. Afterwards I will try to make some didactic reflections upon the topic.

Slavery in the United States of America
“In the year 1810 there were 7,2 million people in the United States. For 1,2 million of these people the words of the Declaration of independence “that all men are created equal” were far from true. They were black and they were slaves.”2
Some people have estimated that 15 million Africans were transported to the United States between 1540 and 1850. That is twice as many than the American population in 1810! Many of the slaves, who were brought to America, died on the journey from diseases such as smallpox and dysentery. Others committed suicide. Many slaves were crippled for life because of the way they were chained up on the ship. By the 17th century slaves could be purchased in Africa for about $25 and sold in America for about $150. So the people who sold the slaves made a god profit and when the slave trade was declared illegal the prices went much higher.

Didactic reflections.
When I chose this issue about slavery it was because of my interest in the time, history and the horrifying way we people take control of other people's lives. I think that it is extremely important to tell students about this dark side of the American history. I find the subject very interesting not only for me as a teacher, but also for the student. Particularly because slavery is something people can see as a perspective. There are lots of ways to teach about American history. I think that it would be a good idea if English and History could work interdisciplinary for a period. Then there would be more opportunities for the children to dig deeper into, especially because of the increased... Køb adgang for at læse mere Allerede medlem? Log ind

Materialer relateret til Slavery in the USA | Engelsk | Didaktiske overvejelser.