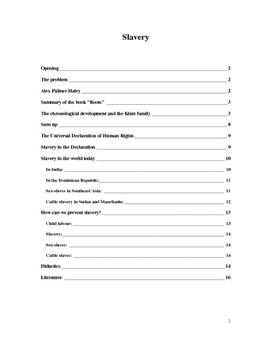 The problem
We are going to describe the chronological development in ROOTS to see how slavery through generations developed from free humans to slaves and back to be free humans again. We have also chosen to look at slavery in the world today and the Universal Declaration of Human Rights, and what the Western Countries can do to prevent this problem.

Opening 2
The problem 2
Alex Palmer Haley 2
Summary of the book "Roots" 3
The chronological development and the Kinte family 3
Sum up 8
The Universal Declaration of Human Rights 9
Slavery in the Declaration 9
Slavery in the world today 10
In India: 10
In the Dominican Republic: 11
Sex-slaves in Southeast Asia: 11
Cattle slavery in Sudan and Mauritania: 12
How can we prevent slavery? 13
Child labour: 13
Slavery: 14
Sex-slaves: 14
Cattle slaves: 14
Didactics 14
Literature 16

Opening
A lot of big authors and filmmakers have through time shown great interest in this subject. Everybody has heard of this kind of cruelty and has an opinion about it. We usually connect slavery with America in the 18th and 19th centuries, where Negroes were sold on auctions, whipped, branded and tortured like animals. Even though most people think of slavery as abolished when the slaves were freed in America, there are still slaves in the world today. The television series ROOTS inspired us to read some more about slavery – in the past and to day. ROOTS is also the “perfect” picture of our idea of slavery.

Alex Palmer Haley
American biographer, scriptwriter, author who became famous with the publication of the novel ROOTS, which traces his family back to Africa and covers American generations as they are enslaved an taken to the United States.

Alex Haley (1925-1902) was born in Ithaca, New York. He didn't excel to school or university. During World War 2 he was enlisted in the Coast Guard as a messboy, and in this period he started to write adventure stories to stave of boredom. After 20 years of service, Haley left the Coast Guard to be a full-time writer. His first major work was THE AUTOBIOGHRAPHY OF MALCOM X. It appeared in 1965 and ROOTS appeared in 1976. In the years between the two books Haley went to Africa to trace his ancestors and gathered material for the book.

ROOTS appeared in 1976 and in 1977 it won the National Book Award and a special Pulizers Prize. The book sold more than one million copies in a year.

Summary of the book "Roots"
It all begins with Kunta Kinte's birth in 1750 in Juffure in Gambia, Africa. He is the "father" of this story. We follow Kunta Kinte through his years of growth in Africa, how he meets with his manhood-test and see how he deals with the fact of being captured by the most horrifying people "the Toubobs", who are slave hunters. They went on board the slave-ship " Lord Ligonier", which sailed across the Atlantic to Annapolis in Maryland. We meet Kunta Kinte and his successor, his daughter Kizzy and her son "Chicken-George", whose father was a poor white planter - in slavery and freedom.

Roots ends and at the same time begin in Henning, USA, in 1920, where Alex Haley as a kid hears his grandmother tell the story about the African Kunta Kinte and his family for generations... Køb adgang for at læse mere Allerede medlem? Log ind