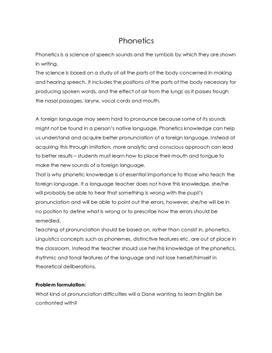 Problem formulation:
What kind of pronunciation difficulties will a Dane wanting to learn English be confronted with?

What can the teacher do to improve the pupil's pronunciation to such a degree that native speakers will always understand him/her? (Methods of teaching)

Phonetics is a science of speech sounds and the symbols by which they are shown in writing.
The science is based on a study of all the parts of the body concerned in making and hearing speech. It includes the positions of the parts of the body necessary for producing spoken words, and the effect of air from the lungs as it passes trough the nasal passages, larynx, vocal cords and mouth.

A foreign language may seem hard to pronounce because some of its sounds might not be found in a person's native language. Phonetics knowledge can help us understand and acquire better pronunciation of a foreign language. Instead of acquiring this through imitation, more analytic and conscious approach can lead to better results – students must learn how to place their mouth and tongue to make the new sounds of a foreign language.

That is why phonetic knowledge is of essential importance to those who teach the foreign language. If a language teacher does not have this knowledge, she/he will probably be able to hear that something is wrong with the pupil's pronunciation and will be able to point out the errors, however, she/he will be in no position to define what is wrong or to prescribe how the errors should be remedied.

Teaching of pronunciation should be based on, rather than consist in, phonetics. Linguistics concepts such as phonemes, distinctive features etc. are out of place in the classroom. Instead the teacher should use her/his knowledge of the phonetics, rhythmic and tonal features of the language and not lose herself/himself in theoretical deliberations... Køb adgang for at læse mere Allerede medlem? Log ind