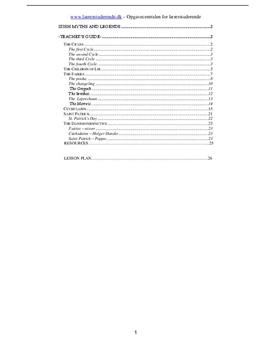 Despite the Irish devotion to Catholicism, the mythology and folklore are carried close to the Irishman's heart.
Most of what we know about pagan Ireland before Saint Patrick converted Ireland into a catholic country is based on what can read in the cycles. Irish history is rich in stories and sages about heroes, fairies, gods, wars and romances. These ancient stories can be found in the four circles of tales:

1. The Mythological Cycle
2. The Ulster Cycle
3. The Fenian Cycle
4. The Cycle of Kings

These cicles has been created in recent years to divide the many stories into categories, there are sorted by different ages.
The first Cycle, the Mythological cycle, is from which the Fairy tradition is derived. The cycle is about how the Tuatha De Danann, or the Tribe of Dana, or the Children of Dana, lived in Ireland long before any humans arrived. When the first Celts arrived to Ireland the country was divided into an upper and lower part. The Celts was given the land above ground, and the Tuatha De Danann was given the underground, where they settled, and eventually became the fairies of Irish Mythology.
The second Cycle, the Ulster cycle, is a story about kings and heroes. Expecially the king Conchobar (Conor MacNessa) of Ulster and his foster son CuChulainn (pronounced Coo-Coolyn), the greatest of Irish heroes.

The third Cycle is the Fenian or Ossianic Cycle, which is called so because of its Author. Here the legends of Fin macCunail and his roving Fianan (warbands) unfold. Finn's son was Oisin or Ossian. This cycle takes place during Sct. Patrick's mission in Ireland.

The fourth Cycle. The last cycle is the Historical Cycle. This is a collection of stories on various high Kings of Ireland and a number of provincial or lesser kings. This is also known as the Cycle of Kings, and are less magical, less heroic and less romantic. The focus is on Kingship and the marriage between King and Realm... Køb adgang for at læse mere Allerede medlem? Log ind