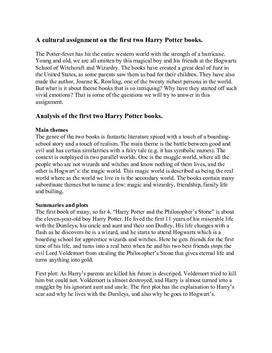 Harry Potter and the Chamber of Secret | Analyse

A cultural assignment on the first two Harry Potter books.
The Potter-fever has hit the entire western world with the strength of a hurricane. Young and old, we are all smitten by this magical boy and his friends at the Hogwarts School of Witchcraft and Wizardry. The books have created a great deal of fuzz in the United States, as some parents saw them as bad for their children. They have also
made the author, Joanne K. Rowling, one of the twenty richest persons in the world. But what is it about theese books that is so intriquing? Why have they started off such vivid emotions? That is some of the questions we will try to answer in this assignment.

Analysis of the first two Harry Potter books.
Main themes
The genre of the two books is fantastic literature spiced with a touch of a boarding-school story and a touch of realism. The main theme is the battle between good and evil and has certain similarities with a fairy tale (e.g. it has symbolic names). The context is outplayed in two parallel worlds. One is the muggle world, where all the people who are not wizards and witches and know nothing of them lives, and the other is Hogwart's: the magic world. This magic world is described as being the real world where as the world we live in is the secondary world. The books contain many subordinate themes but to name a few: magic and wizardry, friendship, family life and bulling... Køb adgang for at læse mere Allerede medlem? Log ind