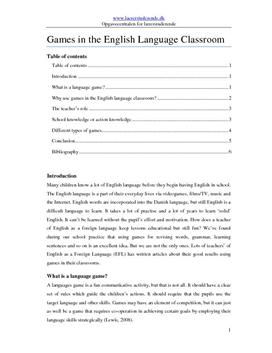 Introduction 1
What is a language game? 1
Why use games in the English language classroom? 2
The teacher's role 3
School knowledge or action knowledge 3
Different types of games 4
Conclusion 5
Bibliography 6

Introduction
Many children know a lot of English language before they begin having English in school. The English language is a part of their everyday lives via videogames, films/TV, music and the Internet. English words are incorporated into the Danish language, but still English is a difficult language to learn. It takes a lot of practise and a lot of years to learn ‘solid' English. It can't be learned without the pupil's effort and motivation. How does a teacher of English as a foreign language keep lessons educational but still fun? We've found during our school practice that using games for revising words, grammar, learning sentences and so on is an excellent idea. But we are not the only ones. Lots of teachers' of English as a Foreign Language (EFL) has written articles about their good results using games in their classrooms.

What is a language game?
A languages game is a fun communicative activity, but that is not all. It should have a clear set of rules which guide the children's actions. It should require that the pupils use the target language and other skills. Games may have an element of competition, but it can just as well be a game that requires co-operation in achieving certain goals by employing their language skills strategically (Lewis, 2008).

Why use games in the English language classroom?
There are many reasons for integrating games in the English classroom, and in the following we will try to cover some of them.
As we said in the introduction it can be very difficult for young learners to learn a new language. Therefore it's important to find something that'll motivate children to learn English. We find that games are a good motivator. Games are an important part of children's lives. It's a very big part of learning and growing up. When children play they are curious, they discover things, and they interact with each other, and with their environment. Games can be used to expand their knowledge and language; it's an essential tool in getting the children to relate to the language willingly (Lewis, 2008). Teaching language through games makes the context different than rehearsing English using only a textbook. When using a variety of games over time you not only develop their linguistic skills, and their ability to follow rules but also different non-linguistic skills. Some games encourage children to think in categories, others to observe and recognize. There are also games that teach children to group and match objects and actions according to specific features, and finally, but very important, they learn to cooperate.
“The game context makes the foreign language immediately useful to the children. It brings the target language to life. The game makes the reasons for speaking plausible even to reluctant children” (Lewis, 2008 p. 5).
Games create an easy and relaxed environment in the classroom which makes the pupils less anxious. When learning without ‘effort' they seem to remember things better and faster. It gives the shy pupils a greater opportunity to express their feelings and thoughts when they feel comfortable, and additionally it's important to remember that learning takes place in this kind of atmosphere (Uberman, 1998). Furthermore, games are also a great motivational factor for children, and it's important when you teach to motivate your pupils in the best way possible. Games add variation to a lesson, and the pupils are more motivated when you provide a fun and meaningful way for them to use the target language (Lewis, 2008).
“The need for meaningfulness in language learning has been accepted for some years. A useful interpretation of 'meaningfulness' is that the learners respond to the content in a definite way. If they are amused, angered, intrigued or surprised the content is clearly meaningful to them. Thus the meaning of... Køb adgang for at læse mere Allerede medlem? Log ind

Materialer relateret til Games in the English Classroom.