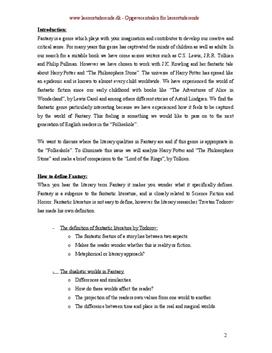 We want to discuss where the literary qualities in Fantasy are and if this genre is appropriate in the “Folkeskole”. To illuminate this issue we will analyze Harry Potter and “The Philosophers Stone” and make a brief comparison to the “Lord of the Rings”, by Tolkien.

Introduction:
How to define Fantasy:
The fantastic world of Harry Potter and “The Philosophers Stone”:
Problem:
The didactic focus:
Primary literature:
Secondary literature:

Introduction:
Fantasy is a genre which plays with your imagination and contributes to develop our creative and critical sense. For many years this genre has captivated the minds of children as well as adults. In our search for a suitable book we have come across writers such as C.S. Lewis, J.R.R. Tolkien and Philip Pullman. However we have chosen to work with J.K. Rowling and her fantastic tale about Harry Potter and “The Philosophers Stone”. The universe of Harry Potter has spread like an epidemic and is known to almost every child worldwide. We have experienced the world of fantastic fiction since our early childhood with books like “The Adventures of Alice in Wonderland”, by Lewis Carol and among others different stories of Astrid Lindgren. We find the fantastic genre particularly interesting because we have experienced how it feels to be captured by the world of Fantasy. This feeling is something we would like to pass on to the next
generation of English readers in the “Folkeskole”.

How to define Fantasy:
When you hear the literary term Fantasy it makes you wonder what it specifically defines. Fantasy is a subgenre to the fantastic literature, and is closely related to Science Fiction and Horror. Fantastic literature is not easy to define, however the literary researcher Tzvetan Todorov has made his own definition... Køb adgang for at læse mere Allerede medlem? Log ind