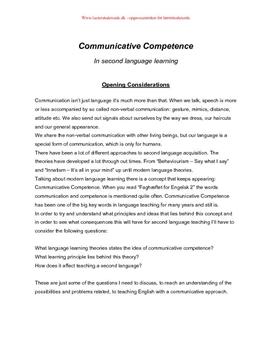 Problemformulering
What language learning theories states the idea of communicative competence?
What learning principle lies behind this theory?
How does it affect teaching a second language?

Communication isn't just language it's much more than that. When we talk, speech is more or less accompanied by so called non-verbal communication: gesture, mimics, distance, attitude etc. We also send out signals about ourselves by the way we dress, our haircuts and our general appearance.
We share the non-verbal communication with other living beings, but our language is a special form of communication, which is only for humans.
There have been a lot of different approaches to second language acquisition. The theories have developed a lot through out times. From “Behaviourism – Say what I say” and “Innatism – It's all in your mind” up until modern language theories.
Talking about modern language learning there is a concept that keeps appearing: Communicative Competence. When you read “Faghæftet for Engelsk 2” the words communication and competence is mentioned quite often. Communicative Competence has been one of the big key words in language teaching for many years and still is.
In order to try and understand what principles and ideas that lies behind this concept and in order to see what consequences this will have for second language teaching I'll have to consider the following questions:

The Cognitive theory
Noam Chomsky 's theory of language acquisition is based on the hypothesis that we all share an innate knowledge of the principles of a concept he calls Universal Grammar
(UG). He claims that children are biological programmed for language and that language develops in the child in the same way that other biological functions develop.1
The concept of competence occurs for the first time in Chomsky 's theory. He... Køb adgang for at læse mere Allerede medlem? Log ind