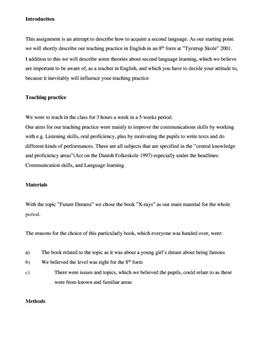 Methods
We decided that the pupils were going to work in pairs and groups a lot during our teaching practice. Sometimes they were asked to read aloud for each other in pairs, sometimes they were to refer to a chapter for the other part, either orally or in writing, which the other one were to read aloud.
At the beginning of period we made them aware that when we had finished the book they all were to perform a scene of a chapter. This was to be done in groups and they were to decide themselves which scene and how to perform. - The conditions were that it was to last for 5 minutes and it had to be in English... Køb adgang for at læse mere Allerede medlem? Log ind