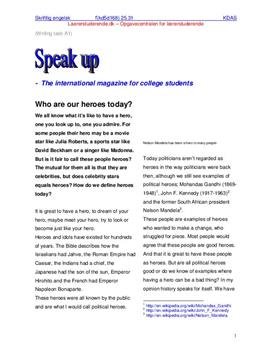 Who are our heroes today?

We all know what it's like to have a hero, one you look up to, one you admire. For some people their hero may be a movie star like Julia Roberts, a sports star like David Beckham or a singer like Madonna. But is it fair to call these people heroes? The mutual for them all is that they are celebrities, but does celebrity stars equals heroes? How do we define heroes today?

It is great to have a hero, to dream of your hero, maybe meet your hero, try to look or become just like your hero.
Heroes and idols have existed for hundreds of years. The Bible describes how the Israelians had Jahve, the Roman Empire had Caesar, the Indians had a chief, the Japanese had the son of the sun, Emperor Hirohito and the French had Emperor Napoleon Bonaparte.
These heroes were all known by the public and are what I would call political heroes...

To the cast on “High School Musical” and their parent's

First of all, let me congratulate you all on being selected for the film. I am convinced that you will enjoy working on the film.
Walt Disney has asked me to be your counsellor during the making of the movie. Therefore I write you this letter, describing some of the things that are relevant when making a movie and some of the consequences of becoming a star.
I am well aware that your agent has informed you about the most important areas but since I work with young stars every day I've been asked to guide you and give you a bit of insight to your future everyday... Køb adgang for at læse mere Allerede medlem? Log ind