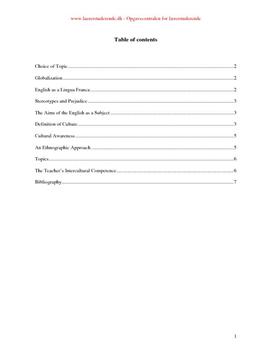 Choice of Topic
As an English teacher we have a big job teaching pupils a language which is very important for their future education. However, language isn't enough, intercultural competence is also necessary if they must be capable of living as a world citizen in this multicultural globalize world.
In this paper I am going to look at how English teachers can create cultural awareness as part of foreign language teaching. Moreover, I will look at the importance of doing it.

Globalization
The world gets smaller and smaller. We are able to take a trip to the other side of the world in less then 24 hours, and a lot of people visit various countries and experience cultural differences on their holidays. Moreover, we can send a message to Japan and Australia which they will be able to read just a few seconds later. The new technology enables us to keep in touch with people from all over the world and allows us to know what is happening on the other side of the world immediately.

English as a Lingua Franca
English has become an attractive language because of its influence all over the world and about 300-400 million people speak English as their first language. In addition, English is the language of computers. Eighty per cent of the data stored on the world's computers is in English. One quarter of the world's entire population can speak English reasonably fluently, and a billion people are currently learning English.1
.English has become the language of international politics as well as travel, science and technology. We do business with each other and we negotiate with each other which are easier when we are able to speak the same language. Being able to communicate in a global language empowers the individual to function in the global village. However, learning English isn't enough it is necessary to be able read the different culture codes to establish co-operation with people who have another... Køb adgang for at læse mere Allerede medlem? Log ind