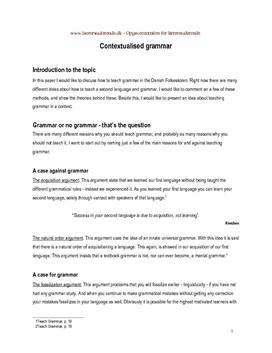 Introduction to the topic
Grammar or no grammar - that's the question
A case against grammar
A case for grammar
Grammar as a final aim?
How do people learn a second language?
The Audio-Lingual Method
Communicative Language Teaching
The methods and their grammar teaching
How to teach in context.
Conclusion - My opinion
Literature

A case against grammar
The acquisition argument: This argument state that we learned our first language without being taught the different grammatical rules - instead we experienced it. As you learned your first language you can learn your second language, solely through contact with speakers of that language.1

“Success in your second language is due to acquisition, not learning”.
Kreshen

A case for grammar
The fossilization argument: This argument proclaims that you will fossilize earlier - linguistically - if you have not had any grammar study. And when you continue to make grammatical mistakes without getting any correction your mistakes fossilizes in your language as well. Obviously it is possible for the highest motivated learners with the aptitude for languages to accomplish a high level of proficiency. But in general it works the other way.

The rule-of-law argument: This argument describes language teaching as a transmission of facts and rules from those that have the knowledge to those that do not. The rules and the order help the learner reducing the apparent enormity of the language-learning task. At the same time it helps out in large classes where you have to deal with unruly and unmotivated teenagers. Apparently they will calm down and start studying when they have to adjust to rules, order and discipline in the classroom.

Grammar as a final aim?
Which guidelines do we have as teachers in Folkeskolen? What does the Common Aims palm off on us regarding grammar?
If we look at Common Aims, grammar is not a skill that the students have to acquire during the years of studying. However, grammar is an essential part of almost every other skill they have to acquire in school. E.g. in the part called “sprogbrug” (use of language) you can see all the skills they should end up having acquired. Every skill has something to do with grammar. The students should be able to express themselves appropriate in different societies; they should be able to use accurate punctuation throughout their text etc.

This is where we can clearly see the meaning of the idea: Functional grammar. Grammar that is actually functional. When you look at the final aims for students in English in Folkeskolen a lot of the items are about being able to speak an understandable English, and you cannot do that without proficiency in the grammatical area.

How do people learn a second language?
The Audio-Lingual Method
This method is an oral based method. Most of the time the learner will be repeating words and sentences because an important part of this method is the use of memorization.
Since it is an oral based method, the teacher only uses the target language in the classroom. The teacher can ch (...)... Køb adgang for at læse mere Allerede medlem? Log ind