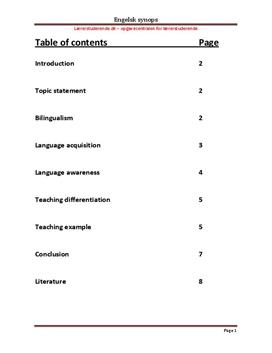 Topic statement
How do bilingual children learn? And how can I teach in a multilingual class?

How do bilingual Children learn the best? That's what I would like to find out! I myself moved with my parents to Hamburg Germany after I finished 7th grade in “folkeskolen”, in Germany I went to a gymnasium in 8th grade. This was very difficult for me, not just because it was a new place, I also didn't speak the language very well and on top of this I had to have French and English as third languages. In my paper I would like to find out if it's more difficult for bilingual children to learn a third language or if they have an advantage? I would also like to show teaching examples of how the bilingual children can be taught and discuss if it's a good idea to integrate their language awareness in teaching.

Using or able to use two languages, especially with equal or nearly equal fluency. (answers.com)

Using two languages in some proportion in order to facilitate learning by students who have a native proficiency in one language and are acquiring proficiency in the other: bilingual training; bilingual education.(answers.com)

To be bilingual is not a bad thing on the contrary there are many advantages to bilingualism, both for the individual and for the society. It is not harder for a child to acquire two languages as long as they are spoken to in both languages, they will acquire them easily (Isadc.org).

Last but not least. We live in an increasingly global marketplace where it's an advantage to speak more than one language. No matter what age or profession, knowing a second language encourages cross-cultural awareness and understanding and that's in my opinion a great advantage (Isadc.org).