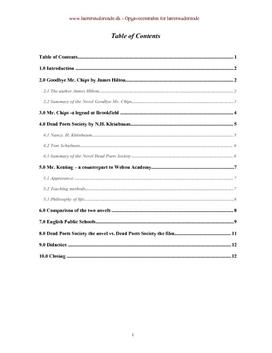 Semesteropgave i engelsk om a comparison of the novels Dead Poets Society by Nancy H. Kleinbaum and Goodbye, Mr. Chips by James Hilton.

1.0 Introduction
In this assignment, we will look at two classic novels: Goodbye Mr. Chips by James Hilton and Dead Poets Society by N.H. Kleinbaum. We find the two books very interesting because they both describe life in boarding schools in two different ways. Both institutions are private preparatory boy schools for upper class families build on old English values such as tradition, honour, discipline, and excellence.
In the following pages, we will sum up the novels and write about each author. Following that, we will make a comparison of the two novels and their two very different teaching methods. Another comparison we make is Dead Poets Society the novel vs. it's film version. It was also our intention to compare the novel Goodbye Mr. Chips with it's film version, but unfortunately we were unable to find it.
We will also look at the English Public Schools in general and their influence on England and the world. Finally we will write our considerations regarding the implementation of the two novels in the Danish Folkeskole.

2.0 Goodbye Mr. Chips by James Hilton
2.1 The author James Hilton
Because of James Hiltons success with the novel Lost Horizon (1933), The British Weekly commissioned Hilton to write a short story to be published in it's Christmas edition. Finding himself without inspiration, Hilton went for a bicycle ride in Epping Forrest until ”Suddenly an idea bobbed up and I saw the whole story in a flash”1. In four days, he had penned the story of an elderly beloved schoolmaster, which he entitled Goodbye Mr. Chips... Køb adgang for at læse mere Allerede medlem? Log ind